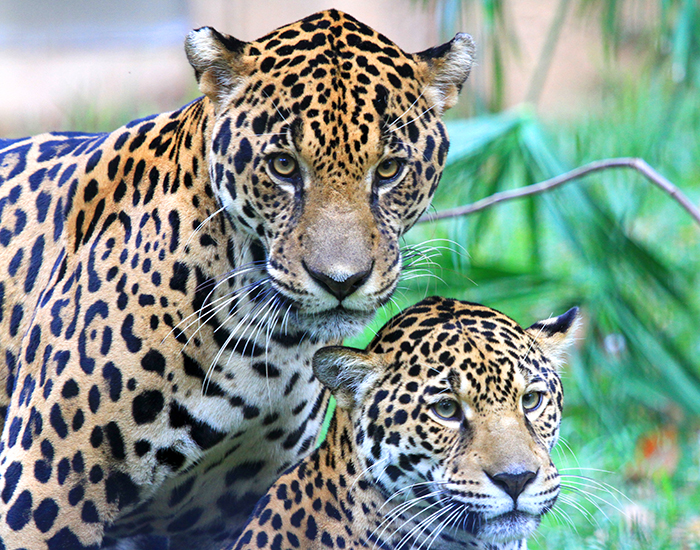 When you visit Alexandria Zoo and contribute to Friends of the Alexandria Zoo, you are not only supporting the animals in our care, but also their wild counterparts.

In Brazil, human disturbance and habitat fragmentation have left jaguars increasingly restricted to protected areas like Emas National Park. To help protect jaguars and better understand their use of fragmented habitat, ZCOG has partnered with the Jaguar Conservation Fund (JCF) to monitor a ‘jaguar corridor’ along the Araguaia River near Emas National Park in the Brazilian Cerrado.

The long-term project will map and monitor jaguar movements and develop a habitat suitability model for the corridor. Additionally, researchers will investigate jaguar predation impact on local cattle ranches and use monitoring data to identify key areas for managing human-jaguar conflict. ZCOG is supporting this important, long-term research and monitoring initiative though fundraising and the purchase of camera traps, GPS satellite collars, and related field equipment needed to advance Jaguar research and conservation activities in Brazil.

In an effort to protect the critically endangered Maned Wolf in Argentina, ZCOG has partnered with the Maned Wolf Conservation Alliance, a cooperative network that includes regional zoological institutions like Buenos Aires Ecoparque and Fundacion Temaiken.

The Maned Wolf Conservation Program aims to establish a recovery network to rescue, rehabilitate and reintroduce wolves to their natural habitat, to learn more about wolf populations through field research, and to help preserve the species through community engagement, conservation education, and the development of a national conservation strategy.

ZCOG assists with funds to purchase necessary field research equipment, such as GPS collars and satellite data services, as well as providing support for workshops and educational materials.

To address extinction challenges facing the Andean Condor, ZCOG is working with the Fundación BioAndina (FBA) and the Buenos Aires Ecoparque on a collaborative, multi-institution conservation and research initiative designed to captive-breed and re-introduce condor populations in their former range in Argentina and Chile.

The Andean Condor Conservation Program (PCCA), under the leadership of Luis Jacomé, has spearheaded innovation in Andean condor captive-rearing, rescue, and rehabilitation; developed new release and monitoring methodologies; and promoted conservation education and local community partnerships. ZCOG has served as the administrative, management, and North American fundraising agency for this program, and helped outfit a remote research station, purchase research equipment, and acquire satellite data for the monitoring of condors released into the wild.

In the study, Guillermo Cubillos and researchers from the National Zoo are conducting field monitoring and interviews with local indigenous communities to determine the population status of condor in northern Chile and better understand how community perceptions of the species can help contribute to its conservation. Thanks to donor support, ZCOG has provided transportation, materials, and logistics funding for each of the first three research campaigns associated with the study.

To help protect the giant anteater and its vulnerable Cerrado habitat, ZCOG has partnered with Whitley-award winning conservation biologist Dr. Arnaud Desbiez and his experienced team of Brazilian field researchers to conduct a multi-year ecological study of giant anteaters in Brazil.

The "Anteaters and Highways Project" is a four- year effort to research why, when, and how anteaters interact with roadways in order to understand and quantify the impacts of road-kill and road barrier effect on giant anteater populations. Results will be used to create science-based action plans designed to conserve remaining giant anteaters and their habitat.

In an effort to protect remaining Chilean flamingo populations, ZCOG has partnered with the Zoologico Nacional del Parque Metropolitano de Santiago (National Zoo of Chile) and Corporacion Nacional Florestal (CONAF) to conduct research on the health status and movement patterns of flamingo populations in northern Chile.

Thanks to the support of program donors, ZCOG has helped fund transportation costs for multiple field capture and tagging campaigns and purchased solar GPS satellite transmitters that are being used to monitor flamingo movement patterns in the Atacama Desert.

The LTCI uses tapirs as ambassadors for the conservation of the biomes where the species occurs, catalyzing habitat conservation, environmental education, communication, training and capacity building, and scientific tourism initiatives.

The Turtle Survival Alliance (TSA) focuses on critically endangered species and employs a two-pronged approach to prevent extinction and promote recovery. TSA works in range countries - especially those considered to be turtle diversity hotspots - to support field research and conservation programs while at the same time securing the species in captivity as a guard against extinction in the wild. The TSA also develops captive breeding programs outside the range countries as an extra measure of protection against extinction. Today, the TSA supports and manages recovery programs for endangered turtles and tortoises around the world.

To help protect the Andean bear, ZCOG has partnered with Armando Castellanos of the Andean Bear Foundation in Ecuador. The Foundation helps rescue, rehabilitate, and relocate bears that have come into contact with local communities.

In peninsular Malaysia, the campaign is supporting WCS's efforts to increase the effectiveness of anti-poaching patrols, and to strengthen anti-poaching laws. They are also supporting local education and outreach efforts in Malaysia, focused on tiger conservation.

In Sumatra, the campaign is supporting WCS's efforts to reduce tiger-human conflict by constructing tiger-proof livestock pens in villages, increasing outreach and awareness, and responding with veterinary assistance to tigers caught in snares. We also support efforts to combat tiger related crime and habitat loss.

In the Russian Far East, the campaign is supporting WCS's efforts to curb poaching using more effective patrolling and monitoring techniques. Also, a new Tiger Health Support Program is working to understand diseases that threaten Amur tigers and train veterinarians so they can respond to disease outbreaks.

The Lion Recovery Fund's goal is to double the number of lions by 2050 through deeper and broader actions by the conservation and philanthropic community alike. LRF targets protected landscapes -- core protected areas and the communal areas within, around and connecting them -- so that they are resourced and managed to help lions, their habitats and prey, and people thrive.

Past projects the Zoo has supported

The Les Whitt Memorial Scholarship was created to honor the memory of Robert Leslie "Les" Whitt, director of Alexandria Zoological Park from 1974 - 2008.

The Award, which promotes advanced training in animal husbandry and behavioral enrichment, provides full scholarship funding to participate in either of the following Association of Zoos & Aquariums’ (AZA) professional training program courses: Animal Training Applications in Zoo and Aquarium Settings or Best Practices in Animal Keeping.

Les Whitt was a founding Board member of Zoo Conservation Outreach Group.